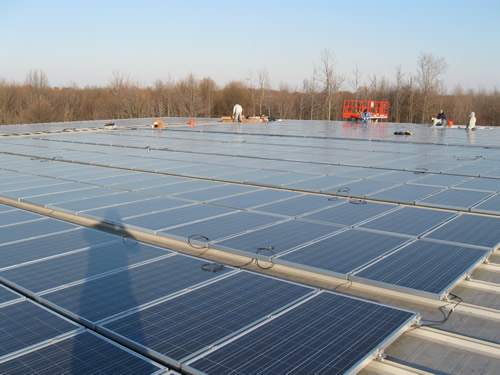 In the spirit of the emerging green economy, Guttenplan’s Frozen Dough, Inc., the Middletown-based leading producer of frozen dough products, began its second century of operation with the introduction of eco-friendly solar energy to help power its production lines. This and other recently incorporated measures will serve to increase the company’s efficiency proving that successful businesses can co-exist within an environmental-friendly framework. On December 11, 2008, the company celebrated the commissioning of its new 110,000 watt solar electric generating facility. The technology will not only help further the company’s environmental goals, but will also help reduce operating costs as fossil-based energy expenses increase.

Guttenplan’s maintains an ongoing program to examine and fine tune efficiency in all aspects of its operations. Early in 2008, company officials turned their attention to the supply-side of energy usage.

Vice President Jack Guttenplan explains, “Frozen dough production is a very energy-intensive process. We needed to find ways to offset our increasing electric rates. So we began to explore solar electric once we had implemented other efficiency improvements, such as our recycling and improved packaging program.”

The feasibility to go solar was accomplished when Guttenplan’s Chief Financial Officer, Shar Seshadri, researched a number of financial incentives available to reduce the cost of a solar power system.

Ms. Seshardi explains, “The most significant factors were a federal energy incentive tax credit of 30% combined with a modified accelerated cost recovery system (MACRS) depreciation of 5 years. An additional tax depreciation allowance for capital expenditures was also applied, bringing the total costs of the system down to one-third of the original cost.”

Guttenplan’s can realize an additional financial benefit as the company is also eligible to sell the green energy produced by the system at a premium rate into New Jersey’s Renewable Portfolio Standards program. The aforementioned tax advantages plus the opportunity to sell power enables Guttenplan’s to have a positive ecological impact while being fiscally responsible.

The final size of the solar electric system was based on the amount of usable roof space available at the Middletown plant. Approximately 11,000 square feet of the roof area was outfitted with 649 solar electric panels, leaving about two-thirds of the roof for future expansion. Combined, the panels generate 110,000 watts of power in full sun and provide 118,000 kWh of energy on an annual basis. (An average home in the USA uses about 11,500 kWh/year.) Any excess energy generated by the system will be transferred for credit to the electric utility to be used in surrounding homes and businesses.

The company’s responsible action will produce important ecological gains for the community as the system will offset 270 pounds of nitrogen oxides, 1,060 pounds of sulfur dioxide, and 166,000 pounds of carbon dioxide annually. Additionally, since solar cells do not wear out, the Guttenplan’s system can continue contributing to the environment for decades into the future.

“The long lifetime of the system with little to no ongoing maintenance costs was very attractive,” explains Guttenplan’s president Abe Littenberg. “We’re very pleased that this solution not only made sense for us from a business perspective, but that we were also able to further our environmental initiatives as well. We hope many other businesses will soon look to the win-win advantages of adopting green technologies.”

Guttenplan’s has been a New Jersey business establishment since 1908 when Jacob Guttenplan opened his first bakery in Long Branch. The company has grown to become a leading wholesale producer of frozen dough in the United States offering a vast array of frozen dough products to supermarkets, restaurants and specialty stores.

Pictured is the solar power installation to the Guttenplan’s Frozen Dough, Inc. roof top in Middletown, NJ. The company has embarked on an ecological program to benefit the environment while reducing its future energy costs.

Approximately 11,000 square feet of the roof area was outfitted with 649 solar electric panels, leaving about two-thirds of the roof for future expansion. Combined, the panels generate 110,000 watts of power in full sun, and provide 118,000 kWh of energy on an annual basis.